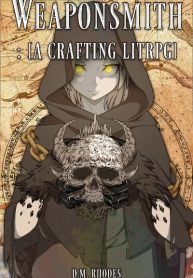 In an era in which ancient gods live in the world’s cities together with their mortal followers, forming tight-knit guilds and powerful temples, the disfigured ash-caster and blacksmith Hineni has lived his entire life as a reclusive outcast. Hidden away behind layers of clothing and just as many walls and doors, he only ever leaves the house in the dead of night, so that neither the gods or anyone else can ever see him.

However, on one of these night-tide outings, he finds that has gained the unwanted attention of what is seemingly a perfectly normal owl and through his unwitting efforts at simply filling his nights with acts of personal meaning, he ends up promising himself to a creature that is perhaps even less versed in human ways than he himself is;

a mysterious, odd owl-goddess that nobody seems to have ever heard of, Obscura.

Hineni, having had no greater purpose in life until now, finds himself willing to accept this turn of events and dedicates himself to creating a brand new adventuring guild, under the watchful eyes of the ancient entity Obscura, who has only one, clear, proclaimed goal –

The Little Brat’s Sweet And Sassy