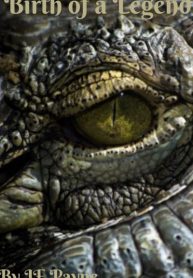 Valor and Violence is a series of short stories following different, yet all equally colourful, characters set in the same world.

Birth of a Legend, the first short, follows Captain Erskine Erwell, a newly promoted Captain in the Calandorian Royal Navy, charged with protecting his people from all who would do them harm. Great news for the Calandorian citizens, bad news for the Skjar reavers that ravage the shores in search of slaves. But when a small reaver fleet slips the net and escapes to the southern jungles of Marduk, Erwell must fight a war on two fronts; one against the raiders, and a far more difficult war against the hostile landscape. If he can’t find allies in this strange land, he may end up being the one in need of saving.

Story two, The Calling, follows Ferez Ahud, an aspiring young battlemage charged with the unsavoury job of ‘terminating’ a rogue member of his college. But how this nobody of a mage became a fugitive remains a mystery, and when the answer is discovered, the tables are turned and the hunter becomes the prey.

Story three, A Family Dissassemblance, follows a young woman named Elizabeth. She’s a simple young gal; sweet, charming, and with a heart of gold. She loves her family, she loves fun, and she loves making things and people explode!

Story four, uploads commencing on the 3rd of September, is titled Blood Reparations! It’ll pick up Levi’s story a little while after he and Erskine parted ways at the end of Birth of a Legend. Read along as Levi struggles to find a solution for his village’s woes, battling the attitudes of obnoxious foreign snobs, drakes (again!), and something altogether far more sinister, lurking deep underground…

QUICK PSA: Aaaand I’m gone again. Probably gonna be off-line until approximately the 24th/25th of September, but I’ll have the next chapter scheduled for upload at the same time it is every week all the same!

The Monk That Wanted To Renounce Asceticism