The Stars Have Eyes 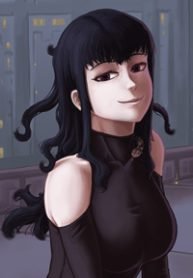 The universe was a vast, empty, dark, and uncaring place. Then life happened, and the universe was changed forever. Only a teeny-tiny bit, but definitely different. Then again, the universe changes a teeny-tiny bit every second of every day. For instance, if someone were to get off the couch and randomly drink a glass of milk? Bam! One less glass of milk in the universe. Changed forever. Well, excluding any time-travel shenanigans, but anyone who puts a big old hole in the time-space continuum just to un-drink a glass of milk should really reevaluate their priorities. Unless, of course, they were attempting to prevent some massive catastrophe vis-a-vis said glass of milk. Such a scenario is by no means impossible, as one should never underestimate the importance of calcium.

Another important tip for any life forms out there is to keep things in perspective. Some look at the vastness of creation in relation to themselves and go, ‘Man, this sucks!’ These people really need to narrow their focus. Sure, they will never affect anything happening on the other end of the galaxy, but so what? That’s way the heck over there, where it doesn’t matter. Therefore, in order to maintain a healthy mindset, it is important to narrow one’s perspective to the things and people that affect them, and that they can affect in turn.

But what happens if one is an unfathomable cosmic being from beyond the veil of reality? What happens when such an existence is capable of influencing entire swathes of the universe just by its presence? A creature such as Magh’rathlak the Observer? That particular entity is only about average as far as reality-warping creatures from the dawn of time go, so its influence over the fabric of reality is rather limited. And it still struggles to keep things in perspective. That, among other things, is why it decided to narrow its worldview a bit by compressing the maddening vastness of its being into a single corporeal form. Magh’rathlak had never tried such a feat, but that wasn’t about to stop it.

After all, how hard could being human possibly be?

I Evolved Into a Super Tyrannosaurus Before Future Humans Arrived

Agenda of the Villainess

Transmigration: I Became The Daughter of a Family of Villains