The Rich Daughter Is A Mob Character, But She’s Not Keeping In Line 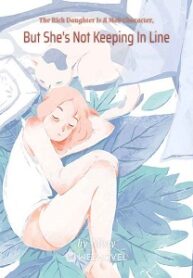 The Rich Daughter Is A Mob Character, But She’s Not Keeping In Line

Bei Qingqing was left to fend for herself over eighteen years before the rich Bei Family finally took her back. She found that her identity as a daughter had been replaced by the ‘naive and adorable’ Bei Bei, who was kept in her family.
Affection grows with proximity, and that certainly applied for them — there was just no comparing the affection the Bei Family had towards Bei Bei, to the affection of their biological daughter. They had spoiled Bei Bei for eighteen years.
Using Bei Qingqing’s adopted mother’s illness as leverage, the Bei Family forced Bei Qingqing to substitute Bei Bei’s marriage to a comatose man, Chen Jiazhi.
It seems that Bei Bei was now all that mattered to them.
Even so, Bei Qingqing married Chen Jiazhi, who had been comatose for years and said to have no chance of waking up. By doing so, she earned her two-million-yuan dowry for her adopted mother’s hospital bills.
Though Bei Qingqing believed that she would be widowed for life, she didn’t expect an accidental kiss on their first night to wake Chen Jiazhi!
Everyone in the entire Chen Family — from grandparents to uncles — are now indebted to Bei Qingqing. They all spoiled her, especially her now-awake husband Chen Jiazhi. Naturally, the Chen Family also took care of her adopted mother by providing her with better treatment!
Bei Bei was left red-eyed in fury! She was supposed to be Chen Jiazhi’s fiancee. His enormous wealth and affection were rightfully hers!
Moreover, Bei Qingqing had health problems and couldn’t get pregnant. Bei Bei will do her best and scheme to replace Bei Qingqing!
Unexpectedly, however, Bei Qingqing was having morning sickness just two months after marrying despite rumors of her infertility!
As for the Bei family that abandoned her? They were declining at a visible rate, and soon wouldn’t even deserve to lick Bei Qingqing’s shoes!

Miss Yu Decides To Change Her Fate After Being Reborn!