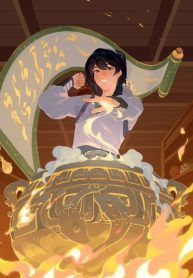 Lu Jie wakes up in a world of cultivation, with martial arts, powers that be, and the mad chase for the immortal heavens and above. He wanted none of it. He’d been beaten bloody in a spar he didn’t remember and treated like a lowly disciple of no worth, and it was just the first day of his arrival! But his plan to escape the sect is interrupted by an old Alchemist’s pills that heal him within moments. A magical pill.

Finding the love of discovery that made him pursue science in his studies budding through when presented with real magic, Lu Jie sets out to study the immutable truths hidden within the world, creating an all together new path of cultivation, that of science. On this journey, he will go on to usher in a new era of knowledge and understanding, fighting against the immortal heavens, and finding a truth hidden within his own soul.

But first, he had to make some drugs.

Note: If you’re looking for hard science or detailed breakdown of the magic system, then you will not find it here. The story takes a light/simple approach towards sciencing the magic.

First Line of Defense, Book 1: Welcome to the Universe

My Fusion System: Fusing a Thousand Chickens at the Start