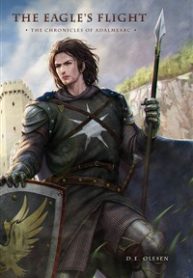 The king is dead; his heir is too young to assume the throne. Jarl Vale wants to become Lord Protector, spurred by his ambitious brother Konstans. Jarl Isarn likewise seeks this power; he is aided – or thwarted – by the return of his brother, the knight and war hero Athelstan, whose squire, Brand, hopes to restore his family’s fortunes, cost what it may. Through all of this, an enigmatic traveller makes plans with jarls, scribes, and priests for his own purpose. Abroad, powerful forces sense division in the realms of Adalmearc and make their own plans. It is only a matter of time before schemes clash, plots collide, and conflict erupts. War is on the horizon.

Story updates every Wednesday. The first, second and third book can be downloaded as ebooks from my site, where a map of the world or of Middanhal can be viewed. The site also contains other background information such as history of the realms, pantheon and religion, calendar etc.

Apocalypse Of All Races

I am a Scarecrow and the Demon Lord of Terror!

Three Meals of a Reincarnator