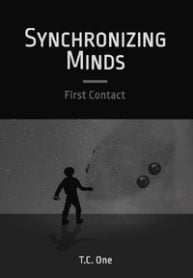 So what are the intelligent aliens like? The humans didn’t know for quite some time, since even though they had ventured out far, they had only found few animal species and those had been as far from sapience as common earthworms.

But now they had finally stumbled upon someone and a first contact meeting is happening. Can ambassador Neil, the represantitive of humans, find friendship standing before a vastly different sapient creature that is six times her size and just learned about the concept of language? Or are the humans actually the weird ones?