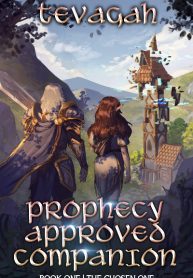 Qube was designed to die.

As the cheerful childhood NPC companion who helps the [Player] learn the world during the start of the game, it was only natural that the big bad would kill her at the end of the tutorial, kick-starting the Player on a quest for vengeance.

The only thing is, no one told her that…
And this particular Player doesn’t like to play by the rules. Being a chaos-loving gremlin, he glitches her out of her programming and drags her on various adventures. They’ll grapple with friendly sharktopuses, Evil Emperors, and what it means to be a person.
On the way they pick up equally unlikely party members, with Qube breaking the world in increasingly strange ways as she seeks to be the very best Companion ever. All the while, Qube herself slowly realizes that her reality is not quite what it seems.
A loving parody of old school games, dungeon’s and dragons, and every player who has ever thought “what happens if I do this…”

Book One is now on Amazon and Audible!

Patreon  – many chapters ahead!

Ko-fi  – coffee!
Discord:  – many friendships made!

This is essentially a first draft, so I welcome grammatical corrections etc.

I Am In Marvel

I’ll Come Clean! I Am The King Of Lolan!

I Have a Mansion in the Post-apocalyptic World