My Children From Another World 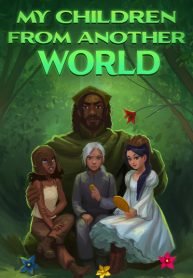 With souls and issues from a world very unlike his own, Rakta Velbrun must raise his children right, train their strange abilities, and keep the world from swallowing them whole.

A fantasy tale of a ex-adventurer father taking care of his beloved children in the wake of his wife’s death. He must tend with noble politics, new enemies, old allies, and the realization that his children come from a world very unlike his own.

New chapters infrequently (hopefully I’ll get better with that again.)