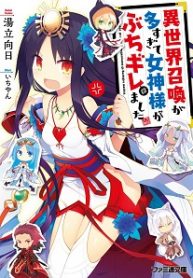 Isekai Shoukan ga Oosugite Megami-sama ga Buchigiremashita, The Too Many Summonings from Japan Have Caused the Goddess to Flip Out, 異世界召喚が多すぎて女神様がぶちギレました

On a certain day, a certain thought came to Japan’s Sun Goddess. ——Aren’t there too many Japanese people being abducted to other worlds? It’s true that the large majority of Japanese are diligent and docile and soft-hearted, which makes them pretty much the best people to ask for favors. “But recently it’s just gotten way too out of hand…… Oh, I’ve got it! Whenever a Japanese person is summoned, I just have to summon an otherworlder!” And now, every time a Japanese person is summoned, princesses and elves and beastmen and whatnot are reverse-summoned. Under the acknowledgement of the government, they begin living in Japan. Today, too, Japan is at peace. And so begins this laidback isekai cultural exchange story♪

The Entire Mankind is Acting As Me, I Shall Secretly Build a Battleship and Shock the World

I Am In Marvel

The Rest Of My Life Is For You