Medusa and the blind woman 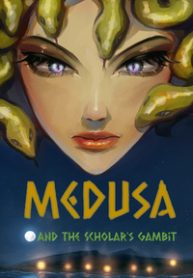 * Volume 1 & 2 of  the novelization of Medusa and the blind woman are available on Amazon Kindle under the name Bryn D. Estelle.

* All chapters from Volume 1 & 2 on Novelpie have been cleaned up and tweaked. New Interlude was added to Volume 3.

* Three new chapters have been added to Novelpie that are marked 21.1, 21.2 and 21.3 which are original content from Volume 2 of the novelisation.

The legendary Gorgon, Medusa, spends a solitary life on her island Sarpedon. The only interruptions to her monotonous life are the occasional expeditions of foolish humans that try to slay her for fame and riches.

This story begins on the day that just another of these expeditions brings along an unusual woman. A priestess of Athena that was born blind and is not afraid of the Gorgon. Soon those two are forced into an unexpected coexistence on the small island.

Will those two unlikely life partners learn to get along?

The great goddess of wisdom and war, Athena, realizes that her priestess is prisoner to the Gorgon and makes a bet with the monster.

The human expedition returns to slay the Gorgon and Eugenia is caught between the front lines. Typhos reveals his true goal and his machinations corner Medusa.

What choices will the dissimilar duo make? Who will come out victorious?

After Eugenia awakens in the city of rowers, Eretria, she finds herself separated from Medusa who is receiving punishment for leaving her exile.

Still recovering from her injuries and desperate, the priestess sets off on a journey to make a return to Sarpedon. On her way she meets many strange new people as well as some familiar faces. On top of that the messenger of the gods, Hermes, tells her of a trial that awaits her on this uncertain path.

Where will her trial take her?

Reunion. After Eugenia’s long trial comes to an end, she returns to the side of Medusa who had suffered her punishment at the hands of Athena.

As they try to find a new balance in their shared company on Sarpedon they are faced with many tumultuous emotions that wind down to the very cores of their souls. Secrets are uncovered, pasts revealed and Eugenia’s feelings are put to the ultimate test.

And amidst all this, a new intruder chooses to trespass onto the secluded isle to cause even more trouble. Aphrodite has set her sights on the Gorgon now.

The Deity of War