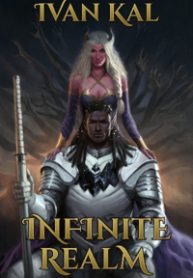 The world has ended, and those worthy of it have received the chance for a new life in a new reality.

Zach grew in power and thrived in the post-Framework world. He became a respected leader, a shining example of what it meant to be good. But as the world ended, he had only one thought: to punish the monster that had killed the world long before the Framework ended it. Yet not even with his incredible power was he able to stand against the World Ender. His arrival in the new realty, the Infinite Realm, gives him the chance to grow stronger, to find the monster again—and make it pay.

Ryun survived the chaos after the arrival of the Framework by pushing harder than anyone else. He grew in power until he became the most powerful being that had ever walked the planet; but he is hated by the world, called a monster by all others, the World Ender. As the world ends and he steps into a new one, where people stronger than him have lived for centuries, he finds himself lost and without purpose. The only thing that had mattered to him had been lost to him long ago. He truly was the monster that people considered him to be, and he now finds himself wondering if this new reality has a place for someone like him—but he had never been one for lying down and dying without a fight. One world fell to his power, and another might follow.

A polished and edited versions of volume 1, 2, 3 and 4 is available on Amazon.

Infinite Realm is a story that will follow two main characters at the start, with a few more joining the cast a bit later. The story will be told in two different time periods: past and present up until volume 3. Past chapters take place in the past on Earth, and take form of flashbacks that follow the two as they struggle to survive and grow their powers in the world changed by the Framework. The main story is in the present.

This story is a mix of LitRPG and Xianxia, and it will have Classes as well as Cultivation systems. There are two main characters, and a few others that are introduced later.

The MC focus will change from volume to volume, with the first being focused on Ryun, and the second on Zach (we are currently in Volume 4). Other MCs will still have chapters dedicated to them, but the focus will be on the main volume MC.

Global Symbiotes: My Symbiote Is A Slime

10,000 Years In A Cultivation Sect: I Obtained A Powerful Technique From The Start