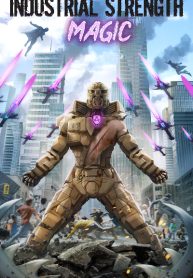 Perry Z has a Magical Destiny.

Born to a Magical Fantasy Princess and a nine-to-five Supervillain, Perry’s never felt…adequate. He’s completely magically dull, and without a scrap of superpowers.

When The System boots, he’s forced to follow in his father’s footsteps, but he’d rather take after his mother.

Maybe there’s a way he can do both…

This is Macronomicon’s take on a lighthearted slice-of-life superhero story. It is one of mine, though. So…you should know what you’re getting into =P

The Worldbuilding is primarily inspired by Superminion, which was in turn inspired by Worm.

The explicit content tags are so if I decide to dip a little dark later down the line, you can’t say I didn’t warn ya. Except the cussing. That’s there from the beginning. I tried to tone it down but a little just slipped in there.

The S-Classes That I Raised

After I Maxed All My Weapon Proficiencies

Madam Is A Sensational Figure In The City