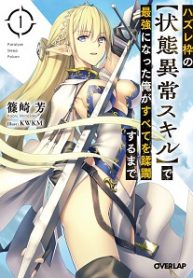 A high school student that has lived as a mob-character ―― Mimori Touka (三森灯河).

During the school trip Touka and his classmates are summoned to another world.

However Touka was the only with the lowest rank ―― he was an E-rank hero.

The status is overwhelming low when compared to his classmates. Moreover Touka’s peculiar skill is supposed to be an absolute failure 【Abnormal State Skill】and…

Thus the former mob-character and abandoned hero, will absolutely become the strongest devil as he advances and strikes back.

You’re reading Japanese web Novel  “I Became the Strongest With The Failure Frame【Abnormal State Skill】As I Devastated Everything” on Novelete.com . Thanks!

The Crippled Boss Loves Me

The Domineering Glutton Of The Future