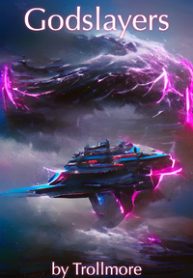 In the ancient, brutal days, the Eifni Organization reached heaven through violence and tore the gods from their thrones.

Now their methods are more precise.  Etheric technology allows them to measure love, create beauty, and reincarnate the souls of the dead into new bodies.  By embedding specially-trained operatives—godslayers—into a culture, they can create the exact conditions to kill a god and save the souls it would otherwise devour.

Lilith was a run-of-the-mill college atheist until a divine being took a bite out of her soul. Rescued by the Eifni Organization, she signed on as a godslayer. Now, after years of training, she’s deploying on her first real mission to a planet called Theria. Objective: perform reconnaissance on the local pantheon and clear out as many of the gods as they can before the strike team arrives.

Godslayers is a story about intrigue, meaning, and militarized sociology.  Updates Fridays.  On hiatus until December 16.

The Earth is Online