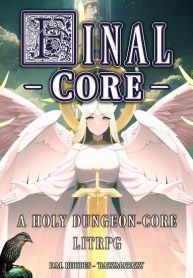 [I died and was accidentally reborn as an angelic monstrosity, so now I’m building a holy dungeon-tower that is tall enough to reach the gods; so that I can complain about it! But the humans think that I am trying to destroy the world.]

The senselessness of so much of the world’s death and suffering is made apparent to the dying paladin, Isaiah, in his final moments before he perishes and is, shortly thereafter, reborn into a comparatively quiet and peaceful existence as a simple blackbird.

However, the powerful magic of the god whom Isaiah himself had served in his prior human life upends this latest existence, as a spell goes awry, turning the entity instead into a strange, angelic monstrosity that is neither man nor animal.

Isaiah, desperate to return to its simple life as a blackbird, sets out to build the tallest tower ever seen by the eyes of the world in order to reach the reclusive gods who reside in the heavens above and make them undo the transformation in a bid to allow itself an escape from the complex suffering of intelligent, self-aware mortality.

The World of Otome Games is Tough For Mobs