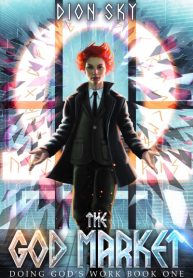 DGW has been signed with Aethon Books and is launching on Amazon and Audible. As such, Book One (up to Chapter 33) has been removed from Novelpie. Book Two onwards remains up and will continue to update in the meantime.

The gods are real and incorporated. Providence is a profitable global industry.

Loki has been disgraced and trapped in divinity’s answer to crap customer service for three hundred years. The PR machine makes him out to be the bad guy. Him. But that’s what happens when you lose a war.

All he has to do to regain his godly powers is avoid the seers, outwit the executives, and win a rematch against public perception. Easy.

Too bad he’s not the only one playing at espionage. When his chief executive is a narcissistic authoritarian and the combined might of the divine powers is ignoring humanity’s problems, he’s bound to aggravate some people — gods and mortals alike.

Mythology, blasphemy, and rebellion combine in this sacrilegious corporate fantasy reminiscent of The Boys meets Good Omens or American Gods. Because gods may be many things, but ‘safe’ isn’t one of them.

DGW is on Discord! – https://discord.gg/fuRPFeV8Hf

The Perks of Immortality

Mark of Time: A LitRPG Timeloop