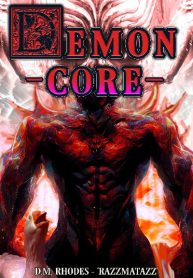 [I originally wanted to become a poet, but I decided to become the terrible Demon-King in order to end the life of every living creature in my search for true beauty instead!]

Despair – Lost in its bleak depths, Swain, a young poet who is driven toward horrific power by the crushing circumstances of his life, takes on the spiritual and physical embodiment of the one-hundred year crisis, becoming the destructive, primal entity known only by the people in their hushed whispers as ‘The Demon-King’.

Obsessed with his new onslaught against the world to find the only thing worth existing for, the Demon-King casts the nation under his horrific dominion, killing tens of thousands in his quest to finally remove the stain of ugliness from existence and to find the thing that his heart yearns for now in this new life more than ever before, a thing that simply can’t exist in the physical world. It is a thing that lies deeper, far down below the physical realm, and to reach it, the tangible barriers of life, of cities, of nations, and of living, breathing beings all have to go, so that he can finally breach through to the spirit world that lies beyond the veil to find it – True, ephemeral beauty.

Even if millions of souls have to die in his pursuit.

Updates every 3 out of 4 Thursdays

The Girl Who Restarted Time

Master Of Martial Arts Has An Advanced Optical Brain