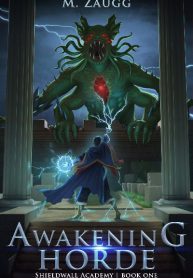 Pax, a street rat without a class, couldn’t care less about the beast waves pounding into the city walls every night. That’s what the city’s warriors and mages are for.

He’s been fighting to keep his crew fed and out of the Guards hands. After his family disappeared, his crew was all Pax had left. He’d do anything for them especially when his best friend is captured.

Pax risks capture on the eve of the Awakening, knowing if he’s caught, he’ll be forced to take a class and lose his freedom.

When the worst happens, he’s forced to become part of the Astan Empire’s war machine. Shipped off to survive the dangers of the empire’s elite academy, Pax fights to control the forbidden magic raging inside him. The powerful, old guard in charge doesn’t take kindly to hints of change or rebellion.

Thrown into dangerous waters, Pax refuses to quit. He grabs for as much power, coin and influence as possible. With the empire fighting for survival around him, Pax uncovers ancient secrets, battles powerful monsters and schemes to unlock ancient and lost spells.

If his enemies would just give him enough time, he’ll make sure they never bother him and his own again.

Update: As of 11/2/2022 I’ve finished writing Book 1, so this project will not be abandoned. I’ve started working on Book 2: Emerging Rebel and will continue my current posting schedule without interruptions.

Way of the Devil

I Became a [Biologist] in a Fantasy World!