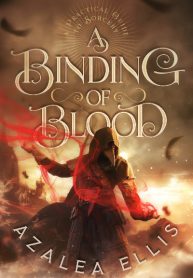 In a world where magic is a science, Siobhan Naught is a genius.

But even geniuses need schooling.

Siobhan has just been banned from the country’s only magical university.

As the unwitting accomplice to the theft of a priceless magical artifact, she has suddenly become a wanted criminal. There are fates worse than death, and if caught, she will face them. Unwilling to give up on her dream of becoming the world’s most powerful sorcerer, she resolves to do whatever it takes to change her fate.

Even if it means magically disguising herself as a boy and indebting herself to a gang of criminals to pay for University tuition.

With the coppers after her, the pressure of trying to keep her spot in the devilishly competitive magic classes, and the gang calling in favors to repay her debts, Siobhan will need every drop of magic she can channel.