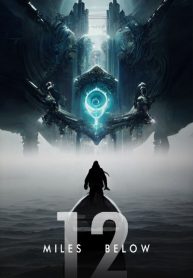 The world is in ruins.

The only escape from the deadly climate is beneath the surface. But it’s another disaster underground. Monstrous machines lurk in the depths. Unhinged demigods war against them, dying over and over, treating it all like a game. The land itself shifts over time, more contraption than rock. And an ominous prophecy states that the key to everything waits on four heroes – but nobody knows who or where they are.

When an expedition into the far uncharted north goes terribly wrong,  Keith Winterscar and his father get trapped together in a desperate fight for survival. Stumbling upon an ancient power struggle of titanic scale; the two will need to set their differences aside while they struggle against Gods, legends, and the grand secrets of the realm that lies below.

Discord can be found here (This is a shared discord server with other books.)
WARNING: This series is ridiculously filled with spoilers, every book has multiple reveals. Discord was made for up-to-date readers since there’s no way to really police spoilers.
Don’t join until you’re current!!